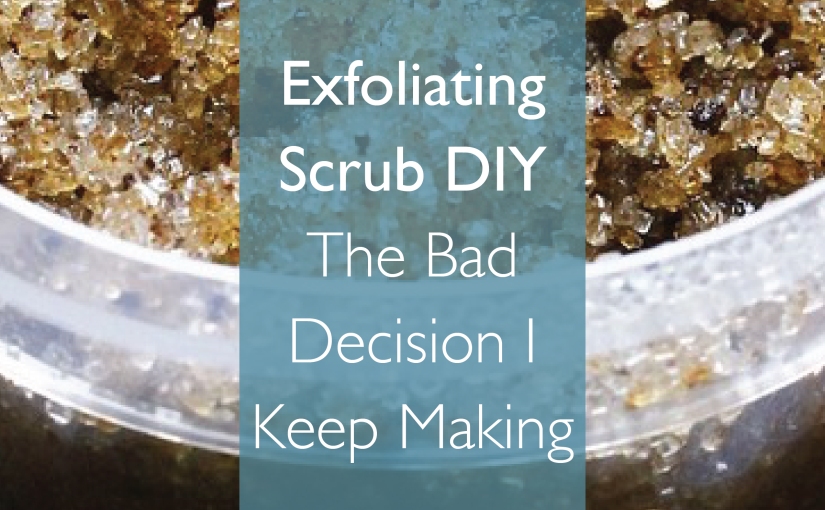 I have skin that closely mimics the Sahara desert: pure crystal white and dry as heck. The whiteness I can’t do anything about (real tan, fake tan, nothing works) but I CAN do something about the dryness! I still remember in middle school when I discovered exfoliating and it was MAGICAL. I could get rid of all the flaky skin for like, a solid day! …before I had to do it again because my skin. Is dry. As heck.

So my love affair with skin scrubs is certainly not unwarranted, though I do go a little overboard I’ll be honest about that. There are just so many different kinds! Especially if you diy them! I’ve found scrubs recipes that include:

Now I’ve tried these scrubs a bunch of times and they always go wrong, and yet, I still keep making them over and over and over. I’m not sure what my addiction is but I promise you I have not yet made my last one!

Here are the three basic recipes I tend to deviate slightly on:

I can’t help but hope for even a pathetic little tan.

This scrub seemed to do the least amount of damage as far as sticking to the bottom of my tub because I was very careful with the amount of honey and oil that I used. Then after using it, I sat in the tub watching it all swirl down the drain and thought that this is probably a really terrible idea and maybe I don’t want to have to call a plumber in a week after my tub stops draining due to buildup of coffee grounds.

As a concept I love skin scrubs. I use them after I shave to get off all the nasty dead skin and whatever moisturizer is in it also leaves my legs feeling like a baby’s butt. It’s pretty great. There’s something about them that just feels so luxurious and sensual. Even my cheap, crappy old homemade sugar scrubs tend to sit on the shelves of my bathtub for months because I see them as a sometimes luxury. That said, don’t leave a sugar scrub in your shower for months it will mold. I speak from experience. Ew.

I love the feeling of freshly exfoliated legs, but exfoliating soaps on the market are so gosh darn expensive – I don’t know if I can spend that much money on my leg skin. Besides, they’re always so dainty! They say there’s exfoliant in it, but there’s maybe one grain of sand. I want something ROUGH. I want to rip up all that nasty dry skin on my legs and get it gone! Which, yeah, probably not so healthy for my legs, but it makes me feel real good.

Here’s another weird thing about my skin scrub addiction – every time I make a new one, I put it in a mason jar.

It’s in the shower.

What’s the sense in that?? They rust after one use and yet every time I make a new skin scrub, I put it in a mason jar with a metal lid. I don’t know if it’s just the ambiance of a mason jar with homemade sugar scrub in it or what but I just can’t get myself to put it in a regular plastic container. It just seems weird.

Also, I should mention that I would never make any of these scrubs as gifts. I make them for myself full well knowing that I may destroy my bathtub and I will take the blame for it if it happens, but I couldn’t bear to see anyone else use them without a full disclosure that they may need to find a local tub fitter when they’re done.

Who else has a DIY that they know they probably shouldn’t do but they do anyway?? I can’t be the only one…

Bonus tip: occasionally I’ll make mini versions of these scrubs for my lips (never with salt, gross) but occasionally with a little sugar and oil. The best mix in for that is a Kool-Aid packet! Makes it a pretty color and it tastes delicious. Warning, it does stain.